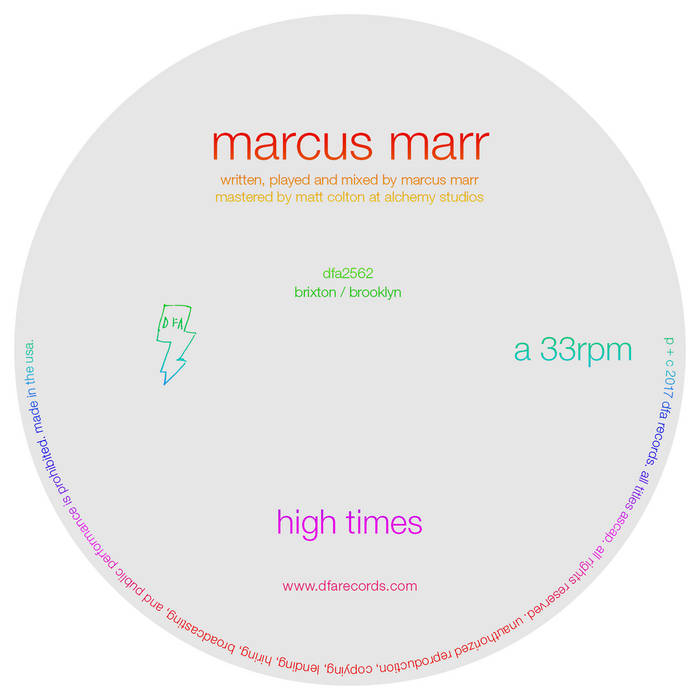 “High Times” is the new single from London-based producer and DJ Marcus Marr. A crowd favorite from Marr’s live set, “High Times” channels the electric guitar stylings of Nile Rodgers circa 1979, and makes good use of the producer’s trademark whizzing synths as well as additional vocals from Nandi Bhebhe. “Once I had come up with the guitar parts I then added all the other instruments one by one ‘til I had an arrangement I liked,” Marr says. “I’ve been playing it out for ages and it always works.”

Influenced by classic soul, rock, disco, and acid house, Marcus Marr makes spacy dance music, often including percolating synths, funky bass guitar, and vocals. Over the last few years, Marr has been releasing acclaimed records via DFA Records, including “Brown Sauce,” named in Pitchfork’s Best Tracks in 2015, and “The Music,” named one of the “Best Dance Tracks of 2013” by SPIN.

A regular at Berlin’s famed nightclub Berghain/Panorama Bar since 2014, the lifelong music obsessive's first encounters with dance music were acid house records, which grew his vinyl collection of rock and soul, and attending all night parties under Brixton's St Matthews Church. Traveling to Brighton’s famous Zap Club to watch DJ Harvey play a lengthy set, he saw the kind of power a DJ can wield over a willing crowd.

Having previously performed with the likes of Hot Chip, Floating Points, Jacques Greene, and Optimo, and performing at the highly-regarded MoMA PS1 Warm Up series, Marcus will play a string of single launch dates in North America this winter in support of DFA labelmate Juan Maclean.

A music obsessive all his life, Londoner Marcus Marr’s first encounters with dance music were acid house records which augmented his vinyl collection of rock and soul,
and attending all night parties under Brixton’s St Matthews church. Traveling to the south of England to watch DJ Harvey play a lengthy set, he saw the kind of power a DJ can wield over a willing crowd. ... more

Bandcamp Daily  your guide to the world of Bandcamp